Alabama baseball suffered its first loss of the season Wednesday night. Junior outfielder and fan favorite TJ Reeves was back in the lineup for Alabama after missing the first four games with hamstring tightness.

Junior pitcher Connor Shamblin got the start, and he came out dealing. Shamblin kept the Skyhawks scoreless through all four innings that he pitched with three strikeouts and only two hits allowed. The Lakeland, TN native did not return after the fourth inning despite only having thrown 57 pitches.

The offense got going in the bottom of the 4th, with RBI singles from William Hamiter and Jim Jarvis. Hamiter found his way around to score on a wild pitch and a passed ball. This put Alabama up 3-0 going into the 5th.

Three of the four pitchers that came in from the bullpen were freshmen making their college debut. Naturally, they seemed to struggle. Brayden Rowe started the 5th inning, and he walked the first three hitters, loading the bases. Rowe did tally his first career strikeout despite the high pressure situation. Junior Jacob McNairy relieved Rowe, getting the final two outs and only allowing one run.

Jake Eddington was the next freshman to make his debut on the mound, Eddington allowed three earned runs on three hits for UT Martin, giving them the lead in the top of the 7th with two outs. Eli Giles, the third and final freshman pitcher in this game for Alabama, came in and got the last out of the top of the 7th.

Star right fielder Owen Diodati battled hard in his at-bats. "Dio" finished 2-for-3 with a single and a triple that came in the 7th inning with two outs. First baseman Drew Williamson hit a line drive through the right side, scoring Diodati and tying the game.

Get our free mobile app

Giles outing took a turn for the worse in the top of the 8th. He walked the leadoff batter, and then the Skyhawks hit back-to-back moonshots, giving them a 7-4 lead. They added two more runs in the top of the 9th, and Alabama did not respond. Giles was given the loss for the game.

Overall, the narrative can be seen that all of the runs Alabama gave up came from the freshmen making their debuts.

"We have a really young team," head coach Brad Bohannon said. "Three guys had their first college outings tonight, and it looked like it."

Offensively, the story thus far this season has been timely home runs from the top half of the order. No home runs were hit for the Crimson Tide against the Skyhawks, and it seemed to lower the production. When runners got in scoring position, Alabama was good about hitting them in. As a team, Alabama hit .235 at the plate, and it proved to be not enough to get it done. 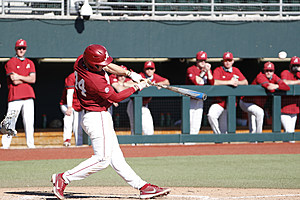 "We have to bring more energy to the park," first baseman Drew Williamson said. "More about winning, less about stats."

Alabama falls to 4-1 on the season, and they will take on Wright State in a three game series this weekend.